I Can Fit in Forbidden Art

Since 2007 I have been wanting to visit the “new” wing at the Nelson Atkins Museum of Art in Kansas City. But the holidays are typically so packed with activities that I never make it there. Finally, last week during a mid-summer trip home I was able to visit the museum with my mom. I am impressed with how the new wing fits seamlessly into the landscape.

We started by viewing the contemporary exhibits. I read the average person spends only 2 seconds looking at a painting, so I have been trying a new tactic of picking out the two or three pieces in a room that speak to me and taking time to really look at them.

My brain can only take an hour of contemplating art, so we headed outside for a visual break. 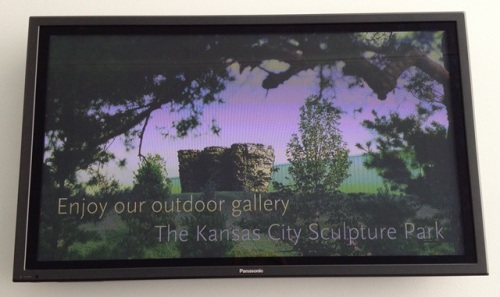 The end of the story must be told first, lest you think I am building up to fitting in one of Claus Oldenburg’s famous Shuttlecocks. It was a gorgeous July day and Mother and I thought we should get at least one picture of the cocks. For scale. We politely waited our turn then Mum snapped a few shots of me standing next to the oversized object d’art.

We agreed I should not attempt to actually get in the shuttlecock as we would surely be thrown out of the museum in shame. Brother, who used to work there, says teenagers have been busted having sex in the shuttlecock. The standing sculpture, not the leaning one. Mother said that if I got underneath the sculpture I could stick my head up in between the feathers and would be “in” it without actually touching it. Gesticulating enthusiastically, I countered that if there is any part of the museum that is carefully monitored, it is the still controversial shuttlecocks (Brother says that is true; there is a room of video monitors and they can zoom in on your face just like in the movies). Mum said again it would only take a second and we wouldn’t actually be touching it. So I gave her the camera and crawled underneath the giant cock.

A voice from above booming like Jack’s Giant itself lectured us: “Laaaa-dies. No one is allowed to crawl in the sculptures. Please Move Away from the Art.” I confess I panicked and cowered, looking around for the source. I identified a nearby loudspeaker and shouted to it, “We’re not! We’re not! Sorry!” then scurried away.

Mother followed, commenting that we could have just snapped the picture quickly if I hadn’t panicked and looked guilty. I countered that we were guilty due to my having climbed in sculptures for the past 20 minutes.

At this time, I would like to point out that I did not go the Nelson-Atkins Museum of Art with the intention of disturbing the peace. I had no intention of doing anything other than respectfully looking at the art from a distance. But my mom said, “I bet you can fit in there.” She said, “It’s outdoors.” She said, “Well I don’t want to push you if you’re afraid.” She said, “Birds poop on the art.”

I will frolic with you spirits of baby lambs.

Anything more by Henry Moore?

Reclining connected forms? Why thank you yes I will.

“Large Totem Head…it expresses a kind of elegant grandeur.” Huh. I thought it was a giant vagina, but maybe I’ve been looking at too many Georgia O’Keeffe calendars. Anyway it’s definitely primal.